Angela Peters an actor who divides her time between the stage and screen in Australia, the UK and Europe. Angela was a familiar face on Australian TV as the face for the 2009 season of “Queensland’s Best Living”. Angela has appeared in award winning feature films, national campaigns, and on the stage, and continues to work as an actor. Right now you can see her in an international Heinz advert, and even on The Wave Pictures music video….

Angela likes to enthuse actors with her stories on this lil B.A.B.E. blog as well as contributing to many other sites including Backstage, Casting Networks, Acting4Camera, Verite Magazine (when it was in publication) and more. And finally, Angela co-founded the World Acting Summit, a global online television show and offers free content to aspiring actors from experts around the globe. You can see her in action during the first series on the YouTube channel, and you can read what The Stage had to say about the show here.

Here’s Angela’s take on it….

The acting hype is real. Believe everything you read about it. It’s wonderful. Walking the red carpet, applause at a premiere, learning a new character, trying to nail that moment when the characters fall in love, meeting the big stars, waiting to be called on set. The only bit that’s not real is that silly voice in your head that tells you to be terrified. Don’t be. What’s the worst that can happen? You don’t star in a movie with Brad Pitt? So what. Trillions of other people never will either. Be everything you want to be, and dream the impossible.

To take the most beautiful lines from my favourite Aussie musician Pete Murray “Don’t be scared of what you can not see, your only fear is possibility.”

B.A.B.E. is about you creating your future.

Join up and receive weekly and monthly tips straight to your inbox that will help you get more out of your acting career. B.A.B.E. is all about you having a more successful acting career. 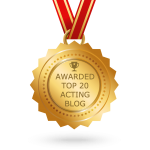