Designing for the future: trends we need to consider now

If you’d asked me at fifteen if there’d ever be a time I couldn’t go to the drive-in cinema, I would have laughed at you like you were a real life zombie from Shaun of the Dead. No drive in cinema – HA! You got to be kidding me. It’s like my family’s Saturday night thing-to-do.

And then just like that, within a few years drive-in cinemas were all but a distant memory. Those foggy car windows, and the muffled sounds of the film chortling through the speakers wedged into your wound up window; me and my siblings’ vain attempts to abandon the car so we could hang solo with the other kids in the seated section. I can’t even begin to describe my disappointment when drive-in cinema closed down. It had been iconic. Going to the drive-in was an institution (for growing up in our family anyway). Needless to say, I also didn’t get to go with a boy and cuddle up while watching a romantic movie. Chalk that one down to another teenage injustice.

So why the melancholy at the demise of this style of cinema viewing?

Well it’s become apparent to me, and most of the world I guess, that times are changing in film and television land. If you’re on a film set now, a director will use any excuse to get a drone in there for a sexy establishing shot. If you’re hot into IT and gadgets, you’ve probably already tried virtual reality (VR) headsets. We are well and truly past holding a Wii controller and pummeling it at a flat screen television by accident. Now it’s all CGI and the surreal realities of Gogglebox, reality television and franchised films. And the design of film and television looks to continue along this trajectory as fast as we can jet Matt Damon back to earth from outer space.

So when posed with the question, what does the design for the future of film and television look like, and what are trends we should consider now, my first thought ran to the chaotic themes posed in Black Mirror – which aren’t too far away people! What will television and film will look like in the coming years? Surely we can’t survive just on massive super hero franchises in cinemas alone, along with the one or two rogue independent film gems that are plucked from oblivion and make it into Sundance or the likes.

No, the future of films looks much more exciting than that.

What if I said to you, before we know it, actors will be in our living rooms enhancing our film experience by taking us to a whole new world of cinema. You won’t need to wind down your window and carefully place the drive-in speakers in, wind your window back up, and sit back. No, instead, you’ll be fitting your headset and lapel microphone and readying yourself for the virtual ride of your life.

Come on this journey with me now…

You’ve had a tough day at the office, you’re tired, and all you can think is I can’t wait to get home and watch some television. But this time, you’re in the television show and you can choose exactly what genre you want to watch in this episode, what you’ll wear, and even who you’ll talk to – to some degree.

You get into your house, drop your bag on the floor, put on your VR headset, and turn on your television. Tonight, you’re in the mood for a spot of comedy romance. You log on and you find your television show, called whatever name you like. Lets call your current show, TEX (I’m naming it team experience for fun).

You open up TEX, episode 4 and you start. Before you know it, you are watching the show. But this isn’t like any other show you’ve ever watched because in this one you can come and take part at your leisure. If you want to pop into the show, you do. Actors in real time, interact with you, and improvise the story forward depending on what you say and where you take the story. They’re actually helping you make episode 4 come to life. And if you want to be, you can be the lead in your own soap.

Now of course, the expense of having actual actors play out these show night after night will mostly one day be replaced by AI, but for now, without the sophisticated AI technology knowing your every move, and determining the appropriate answer, instead you get to pay for a studio of actors. They are there on your show, as well as chatting to others entering and leaving their own versions of a television show.

I bet it’s not that far away. 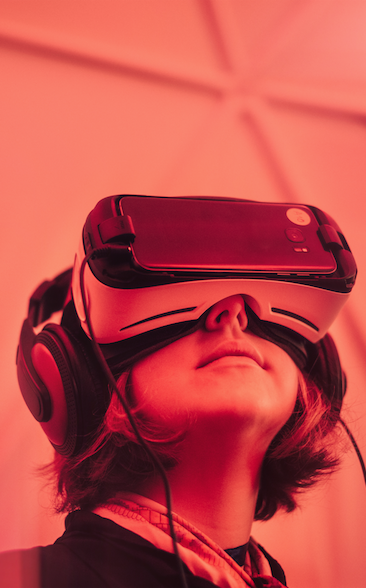 See the thing is, when Blade Runner came out in 1982, who could have imagined that so many likenesses would exist in real life, only two years away from its filmic setting – a dystopian Los Angeles of 2019. I didn’t watch the film for some years on, but even when I did while at university, the setting for that film seemed so surreal. And then there was the hover board from Back to the Future. We have hover boards now! We actually have hover boards.

And when you think about it like that, the idea that you could be your own star in a real life television program playing out in your living room suddenly doesn’t feel so far fetched. Yes indeedy, it is coming. The design of film and television looks virtual reality heavy, filled with experience, augmenting and improvisation. VR and actors and production companies will encompass a full user experience, only this time – it will be in film and television land.

Makes you wonder what the manual for that television show will look like doesn’t it. And don’t even get me started on the can of worms it opens in terms of politically correct conversations, race, gender, age and the likes.

Your television might just be your own Gogglebox one day. Now isn’t that a terrifying thought.

Right, I’m off to get involved in TEX episode 10. This one is a sci fi thriller, where Silent Bob and Darth Vader meet for the first time.