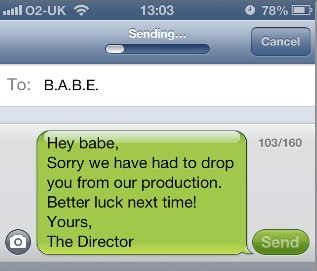 Ooooh the title says it all really.

I got dropped. I actually got dropped off a project. It is near enough to a year ago now so it isn’t fresh and I’m not rocking myself to sleep each night crying. But I did feel a little (read that a lot) resentment at the time.

Actors take their jobs seriously. We work hard on characters, lines, motivations and truths. You name it we work on it. So when you land a big part in a film you take all that actor energy and pour it into your whole being. You create a world for your character that resides in pretend land and eventually becomes real on the big screen.

I was weeks into learning lines, having lessons with a coach (some words had to be spoken in another language), I’d had costume fittings and lots of meetings with the producer and director. And just before filming was due to commence, I got the formidable call.

Imagine that. You are flicking about on a Friday morning getting a coffee, looking up to the sky and thinking life is sweeeeeet, I am so lucky. You see a young boy flying a kite into the big blue sky, and a man whistles as he walks past walking his dalmatian…. STOP…hold up. Okay maybe the kite and the dog bit was a slight exaggeration. But I really was sipping a fresh coffee and happily almost skipping down the high street when that fated call came. He had to tell me they had changed the character and needed something different. Simple as that. The producer felt awful. I could hear it in his voice. He felt like a kid in a candy store who had been scolded for taking one piece of candy too many. He didn’t want to have this conversation, he didn’t know what to say, he couldn’t get off the phone fast enough. Simple. In this instance, he wasn’t calling all the shots, just some of them. And he didn’t want to be on the phone to me saying this after we had had any number of professional meetings about the production.

After the resentment and frustration passes, and we get down to the nitty gritty of it there is not much we can do. Actors will eventually have this happen to them just like if you rock climb you WILL eventually fall. You can be on a pencil until the eleventh hour and then get told they went with the other girl. You can not hear about a job for weeks and then suddenly book it at the last minute. And you can just as easily lose a role that you thought was ‘in the bag’.

I don’t want to sound flippant. I just want to be realistic. If you are a good actor and you are good at your craft, this is no reflection on you or your talent. The biggest error I have seen actors make is to assume being dropped is because they are a rubbish actor. It is rarely that. You may be a diva and that will get you dropped. You may have the wrong look to the leading guy and that may get you dropped (or not booked at all), you may have the wrong accent and that may get you dropped. But if you are a great actor, it is never about your acting chops. 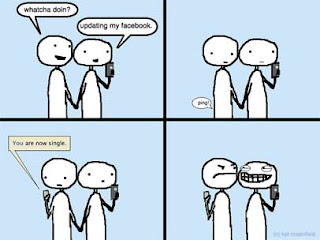 You must get away from immediately making the assumption that you losing a job to someone else is about your ability to act. It’s not. I’m sure you heard the story of the incredible audition that Jennifer Lawrence gave for Silver Linings Playbook, and how allegedly before that Angelina Jolie was up for the part? Right…so it happens to A listers too. I wonder if Jolie was also happily sitting at home enjoying a freshly brewed coffee and thinking how sweet life was when she was told that that younger, pretty, soon-to-be-biggest-name-in-Hollywood-right-now actor had just booked her gig.

Yeah so hey, I got dumped and it hurt. And I felt duped. And I felt a bit silly for taking it so seriously. And I felt dumb for a moment. I realised, it’s not all about me. I’m not an awful being and actor. I am not the first person this has happened to and I won’t be the last. I got back up again on the horse and kept on riding. And it feels really great to acknowledge it, share it and move the hell on! I mean, we get dumped in the playground from aged 5, surely we can handle a little bit of rejection in cinema land too.