Is technology bad for your baby?

Why you might just wanna turn the iPad, iPhone, and screen OFF

I was listening to this TED talk by Adam Alter (go the Aussie psychologist) recently and he said some stuff that REALLY SANG to me. And I mean sang as in – I wanted to get into a church and belt out a bible song…and I am not religious. It was all around the topic of our use of mobile phones and our own personal time. If you want to catch that TED talk itself, I’ve included the link at the bottom of the page so you can check it out later.

What the nuts and bolts of this talk said to me was that we are taking our precious happy time and replacing it with using our mobile phones, mostly for things that don’t make us happier, but typically make us feel slightly worse. And I’ve ranted about mobile phones before. I think we use them way too much for what is good for any human consumption. And I also think we don’t yet know the half of what social media is capable of to our emotional well being (there’s some great journals and articles on that page if you want to read more on the psychology of it all).

Right now this is a big topic for me. I have a little baby boy here at home with me, who isn’t in nursery yet, so he needs constant attention, distraction, love, support and encouragement. And as you most likely know if you are reading the acting mummy page, with a baby over six months and under a year, they get bored really easily. I have to constantly change positions in the living room, go for park walks and buggy runs, let him go to soft play, visit friends with gardens, read books, sing songs, attend French class…you know…the list of baby options is endless. And it’s all about giving him options, helping him develop and interact with others, learn life lessons and wear him down, (so he will sleep!!) ha ha.

So, it caught me off guard recently when a mate asked me how much television my little one watches per day. I kind of stopped a second, thinking to myself – is this a trick question?! Then I realised it wasn’t. I replied, “Oh he doesn’t”. She said, “Oh then well done. That’s great.”

My friend wasn’t being rude, flippant or judgy, she just didn’t know I hadn’t given him that option yet. And I know he will later on. I am a realist. I know I am going to welcome the distraction of Frozen 2 and Transformers 5 and Cinderella like I welcome a glass of wine as soon as my baby lays down for the night. I don’t live under a rock. And I don’t want my baby to grow up like Captain Fantastic and not know the ways of life in modern society. But right now, he’s a baby, so he just doesn’t need television in his life.

I also get the commonalities that exist between babies at play in any society, and I really don’t think that access to television, iPads, iPhones and the likes offers him any more advancement than the red ball he’s currently obsessed with. Studies in a cross section of countries (first and third world) have shown that babies and young children play very similarly and use the same imagination to create worlds and pretend games. Basically, kids do all the same stuff regardless of whether they live in a mansion, or in a wooden hut on a pile of dirt. It just gets to be a bit cleaner and more elaborate if it’s the former environment.

So you can imagine by delight when Adam Alter, during the TED talk, referenced Steve Jobs answering a journalist’s question during the release of the first iPad. Adam explained Steve Job’s reply to the reporter – that his children hadn’t tried the newly released iPad yet. Steve Jobs, the Mr Apple Man himself, hadn’t given the iPad to his children?

Steve Jobs, the Mr Apple Man himself, hadn’t given the iPad to his children?

Wait what? But I have seen eighteen month olds who can swipe through an iPad faster than I can speed dial my mum. How is this possible?

So Steve Jobs, the creator of some of the most marvelous household technology advancements that we have seen this century, understood the importance of limiting how much tech his own children had access to.

Now I lived without a television quite recently, as little as four years ago, for over three years while I lived alone in a studio in London. Friends would come over and laugh at the irony of an actor not owning a television (yeah yeah I know…). I attempted to explain that if I did want to see television shows, I had Netflix and I would also (back then I was legally allowed to) watch BBC from my laptop. So if I did sit down to watch television, it was targetted-fully-focused-viewing where it was a show I specifically wanted to engage in. It stopped me from coming home, switching on the television and watching hours of mindless senseless rubbish that will be forgotten within a millisecond. But also, almost all of the best evenings I’ve ever had alone, or in the company of others, were ones where the television was off, and the record player or background music was on.

Epicurious said a bunch of wonderful things that I vaguely remember from Philosophy classes in uni, two of which were to make sure you eat with others every day, and to take time to reflect on your day that was. Simple right? Wrong. 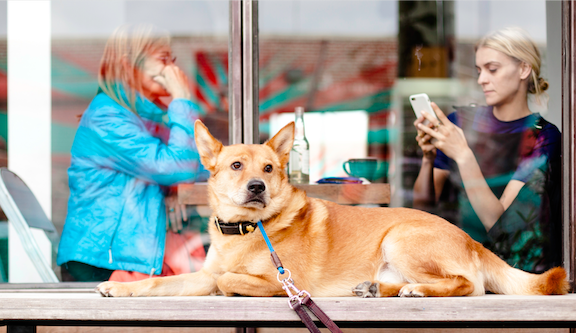 You’d be amazed at how many people don’t take the time to reflect on their day. Oh….and who don’t put their phone down while eating lunch or dinner with others. I mean, sure, if you’re at work in an office and you get just one precious hour off to read personal emails, surf and catch up on social media, of course you’re going to do that (I used to when I was in corporate land). But if you’re sitting down at a restaurant with a pal, or loved one, and you’re both on your phones scrolling through your FB feed, why bother sitting together at the restaurant. Couldn’t you just as easily have gotten a subway and sat alone on a park bench?

And to come full circle, this comes back to the choices we make as parents. The example you set for them starts as early as four or five months – once they start to take notice of the world – after that formidable period of no sleep in the first few months. Hell, I don’t think I would have survived breastfeeding without endless Netflix television shows in those first few months!! (more on that some other time but I did watch television on an iPad with the headphones on, and where my baby couldn’t see the screen). But once your baby is responding to you, seeing what you do in their company, how you respond to others, speak to others, what you do each day, all of it, that’s when it matters. That’s when their communication skills, development skills and their cognitive skills are all taking shape. Those little sponge babies are taking it all in.

And there is a LOT of evidence to suggest that any television viewing prior to the age of two (2) is bad for babies – some factual references are included below if you are that way inclined. I studied Psychology a long long long (did I say long) time ago so most of my study was the crazy pre-tech era when dial up made a loud whirring sound and you couldn’t make a phone call at the same time as using the internet. But even then, they frowned upon babies under the age of two watching television because it does little to nothing for their cognitive development. And if anything, babies don’t understand the fuzzy images on the screen anyway. If it may adversely affect their general learning, and potentially slow their development, why would we do it?

…and yes, I am aware that raising kids is a tremendous feat and sometimes we just need a reprieve. I get it! Most of the last 6+ months I have been a hot mess. I constantly wonder if I have showered for the day. I frequently leave items in the fridge that shouldn’t go in the fridge, and I once tried to make myself a cup of tea with baby formula (true story!). So yes, I get why anything that distracts our babies for five minutes and gives us time to breath, is awesome. But if we won’t give them milk before a certain age because it’s a problem, and we sterilise their bottles to keep them safe, why wouldn’t we want to keep their brains safe too?

So you decide what you want to do. I would never profess to be any type of expert, or Psychologist, or professional doctor. But I do know that I want a social baby, and one who communicates with the world directly. I want him to engage with other babies and grownups, and then later, I can accept that he will have access to all this technology stuff and at that point, we assess it all again.

What’s your take on it all? What would you do if you had your time over? What have you chosen to do right now? And finally, if you’re about to have a baby, what do you hope to do? I would love to hear your take on things.

TED talk with Adam Alter: Why our screens make us less happy.

Why to avoid TV for infants and toddlers – In case you have a little one (below 18 months) and are courting the idea of showing them an iPhone or iPad, this may provide you with some food for thought as to why it could be good to hold off a little longer.

Parents of Young Children: Put down your smartphones – A fascinating read on why having smartphone free time is so important for your baby or child’s communication development and general learning.