Oh yeah….it’s toddler time and it is not pleasant. And I’ve already been warned that “threenagers” are even harder. But I really am not sure if he could get much worse than now..

Here’s an example of my exceptional parenting on the weekend – yes, this is the middle of a quick shop to get some last minute groceries (Nailing Parenting 101). 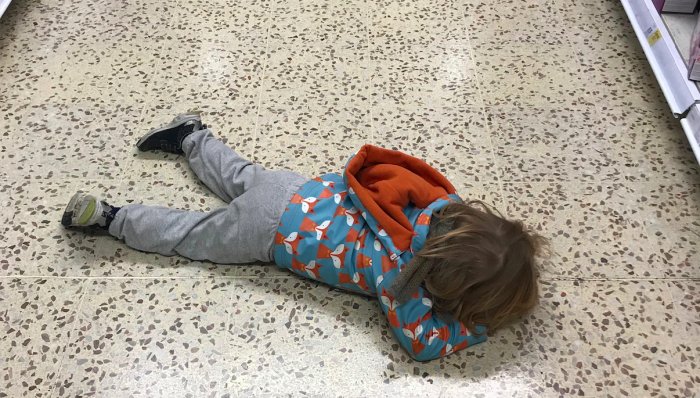 For the busy working actor who is already juggling auditions, self tapes, call backs, voiceovers, workshops, networking, trying to have a relationship, extortionate childminding fees and some, we really don’t need a toddler losing their mind as well. Right?! And yet they inevitably will, often on a daily or weekly basis.

I am completely and utterly shattered. I spend most days wondering if I can get away with not ironing that outfit that used to ALWAYS need to be ironed; I go at least one to two days extra between hair washes (don’t worry agents – I wash for auditions); I’m also likely to not remember if I had breakfast that morning, or if that tiny brat stole it after he ate all of his own eggs, toast and weetabix.

Tiny humans are relentless. RELENTLESS I tell you.

So I had to think really hard before I posted this particular post. I don’t actually want to deter a single woman (actor or otherwise) from taking the great leap into family land. But I also want to offer at least the tiniest bit of constructive support (drink more wine for personal sanity!!!). Because otherwise, I’m just not being true to B.A.B.E..

And so I pondered, and pondered. What is useful for an acting mum (dad) to know when they’re tiny two monster turns into a crazy demon?